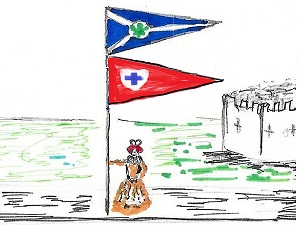 Commemorating Queen Elizabeth the First's immortal Armada speech at Tilbury Fort in August 1588, this 35 NM challenge against wind and tide is a new event in 2019

Co-hosted with Erith Yacht Club, this event caters for both competitive racers and more social sailors who wish to extend their skills in a longer sail. Taking a cue from events such as the London Marathon, entrants are encouraged to raise money for the charity of their choice - we suggest you fundraise via www.justgiving.com.

Full information is available in the Notice of Event.

“We stuck, nor breath nor motion;
As idle as a painted ship
Upon a painted ocean.”

Yes, the weather was great for sitting on a beach watching yachts bob about, but not so great for competitive sailing. With light easterly winds forecast the event committee made the difficult decision to start the race 1 hour later than scheduled, and to shorten the course to a short “sprint” from Erith to Thurrock. The winds were simply too light to safely transit the Tilbury Docks area under sail alone.

Despite the conditions, 11 boats from three clubs made the Erith start line, with a number of Thurrock boats having made their trip upstream the night before. The ebb tide was running at its peak and the boats all stayed a respectable distance upstream, doing their best to get some way on as the count down commenced. The start showed the Erith boats displaying some local knowledge of their home patch, leading the fleet out into the Long Reach.

Unusually there were few shipping movements to interrupt the fleet, and they certainly created a picturesque site as they spread out from Purfleet to the Dartford crossing, the boats competing more against the conditions than each other.

The wind gradually built up to a barely respectable Force 2, and it was almost an hour and half before Valencia crossed the line at Thurrock. The final boat crossed 45 minutes later. Beers and barbecue commenced soon after!

So the event didn’t quite live up to our ambition for a longer distance challenge, but it was a great day and we all made new friends with members of other clubs. Unlike the 1588 version, this Armada will return!

The official race video can be viewed on the TYC Youtube channel.

The support boat took a number of photos which can viewed on the TYC Facebook page. High resolution copies are available for a minimum £10 donation to the RNLI on our dedicated justgiving page.

Need crew for the Armada? Find them on our dedicated Tendrr Page.

Currently no events are available

Currently no events are available

All TYC members are reminded that special byelaws apply on the tidal Thames. All vessels, including those under sail, are required stay to the right of the fairway. Please apply common sense:

Complying with rules reduces the chance of over enforcement being applied, and learning to sail within the constraints will make you a better sailor. For more information please visit the PLA's Boating on the Thames website.

We use cookies on our website. Some of them are essential for the operation of the site, while others help us to improve this site and the user experience (tracking cookies). You can decide for yourself whether you want to allow cookies or not. Please note that if you reject them, you may not be able to use all the functionalities of the site.